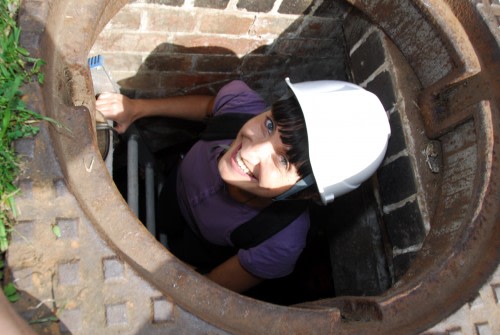 Explore the underground network of tunnels; old sewer tunnels, an old Post Office Tunnel, some ‘secret’ tunnels for military purposes and even some old bank vaults and old private tunnels. See the old brick and stonework and recognize the various periods of construction as pointed out by your guide. Tunnels Tours are the hot new must-do adventure in Cape Town.

Some gumboots or old non-slip shoes (old trainers) that can possibly get wet, and some older clothes.

It is slightly warmer in the Tunnel and you need to be medically fit and reasonably sure-footed as some parts are slippery, climbing a 3-meter vertical exit/entry ladder both require reasonable agility.
Very important: don’t forget to bring a Torch. We also have powerful headlights for sale at R80- each.

Tunnel exploration is a new urban activity below the City of Cape Town. Parts of the underground Canals and Rivers date back to 1652. They used to supply the passing ships with fresh water. Later these Rivers flowing through the City became pleasant walkways shaded by Oaks with Bridges going over them. As the years passed and the City expanded they were eventually covered up and forgotten. Cape Town was once known as the little Amsterdam in a foreign country.

To confirm your booking, payment to be made in advance as we need to arrange your permit. Booking 2 weeks or more in advance is recommended.We charge per group size. Discounts are available for group bookings

Also you will be required to sign a standard indemnity form.

Cape Town is world famous for the majestic beauty of Table Mountain which seems to embrace the City in rocky arms and seeing tourists and residents alike walking around her streets looking up at the spectacular sight is a common occurrence.

Less known is that there is another, mostly overlooked, but fascinating realm to explore in Cape Town right under her centuries old streets.

The next time you drive into town along Strand Street past the Castle, look to your left at the Castle wall and think about the fact that ships used to moor where you are driving and your car would be under water.

There is not enough space to go into the history of the City’s tunnels here but they basically began as canals built in various stages as the City’s waste water system that used to flush into Table Bay. When, like most larger European cities at the time, the canals became overwhelmed by the bourgeoning population there were epidemic outbreaks and the City’s leaders acted quite quickly and chose to cover up the canals. Over time the waste water system was updated and improved until now most of these old water canals lie unused beneath the City, although Mountain and spring water does still flow through them into the sea.

Surprisingly, the tunnels are remarkably ‘clean’ and you are unlikely to see a single sewer rat although there is a faint ‘musty’ smell in some places. You are more likely to see groups of cockroaches which are unexpectedly inactive and just seem to collect in family groups. Most are the normal colour but the odd one may be white.

Not all the tunnels are old sewers however, and there is an old Post Office Tunnel, some ‘secret’ tunnels for military purposes and even some old bank vaults and old private tunnels.

It really is fascinating to see the old brick and stone work and recognize the various periods of construction as pointed out by your guide.

It is quite staggering how much the City has changed since the first white settlers landed here and it is equally impressive to see all the hand-formed stone-masonry which is as good as it was 300 years ago!

Refund of 80% of the tour price.
Starting From